It’s time to get back to politics

I decided to launch a petition to Fujifilm Global: it’s time they to solve once and for all the annoying problem of not having the option to crop (and frame) in camera using medium-format style aspect ratios.

If you’re tired of this stagnant situation as well, sign here.

Text of the petition after the image: 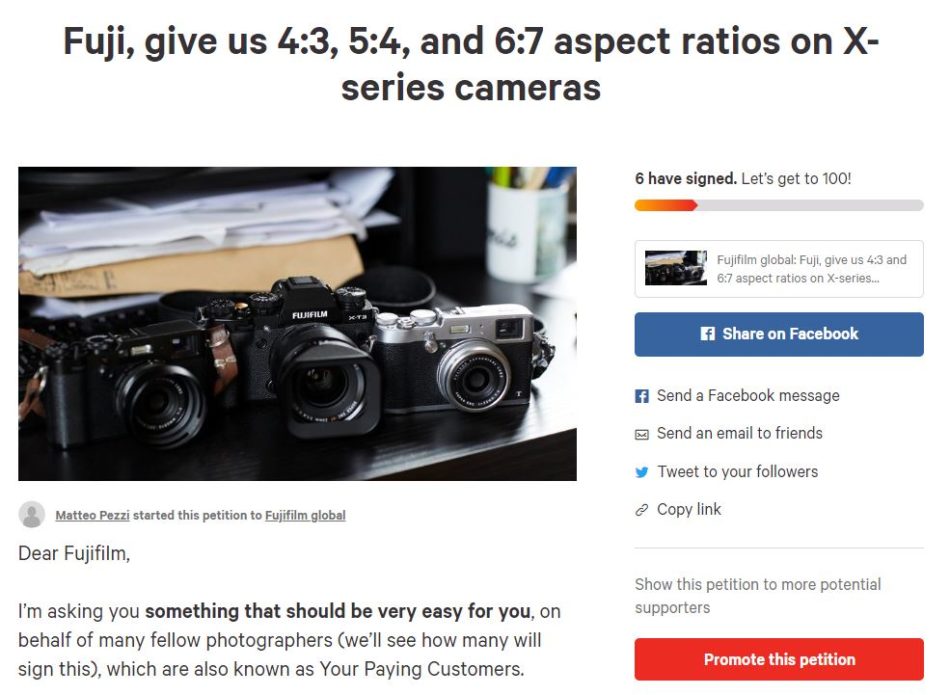 I’m asking you something that should be very easy for you, on behalf of many fellow photographers (we’ll see how many will sign this), which are also known as Your Paying Customers.

Could you please add three aspect ratios to the already possible ones in the X-Series cameras?

Specifically the ones typical of medium format:

The main advantage of mirrorless cameras is the electronic viewfinder.
I shoot raw, so whichever in-camera crop I choose the whole frame is recorded, but the possibility of framing directly in square mode is infinitely better and more precise compared to cropping later, if I know I’m gonna crop it anyway.
Let’s boost this feature some more.

The 3:2 aspect ratio is a weird invention by Oskar Barnack: it should have been forgotten for good with the first digital bodies, but unfortunately camera companies insisted on it as the de facto standard for the industry.
But we’re digressing I guess, so let’s get back to the point.

those who prefer the larger and more elegant aspect ratios
those who never tried them
Being able to frame in those formats would be splendid, dear Fujifilm.

Why not add this feature in a future firmware update? Indeed, why not? It would cost next to nothing and make many people happy.

I suggest to include this feature in every single X-Series camera and to update their firmware accordingly.

If that turns out to be much work, well, I understand.
In that case, just do it for the bodies I personally own: X-T3, X100T, X100F.
That’ll be all. Thanks in advance.